Celebrate the heritage of National Afternoon Tea week with us at the Vale Resort.

Afternoon tea week celebrates the great British tradition of Afternoon Tea and we are looking forward to all the fabulous celebrations, and what better way to start than with its wonderful history!

First introduced to England by Anna, the seventh Dutchess of Bedford in the year 1840, when it was usual for people to only take two meal times and the main meal being in the late evening at around 8pm. Afternoon tea was designed to be served at 4pm when the Duchess would become hungry during the late afternoon.

This soon became a fashionable social event, whereby upper-class and society women would dress up with gloves and hats for their afternoon tea which was usually served in the drawing room of their estate between 4pm-5pm. During the late 19th Century ‘tea rooms’ were the place to be for meeting friends and sharing gossip. 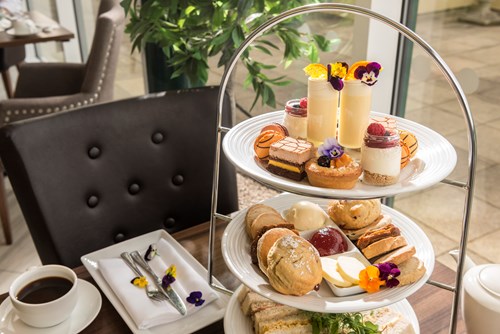 Occasionally hotels will serve “high tea”, which historically the middle and lower classes would have a more substantial high tea later in the day to replace a late dinner. With its name deriving from the height of the tables on which they are served, and high tea being served at the dinner table.

Still upholding as a social event nowadays, afternoon tea is a popular way to celebrate occasions from birthdays, anniversaries and baby showers.

Our afternoon tea is served 1pm-4pm